Currently I’m working on a new project that focuses on honeybee’s brood. This topic has to be handled with sensibility and a certain regard. Bees are endangered species that are already farmed worldwide. Of course we do not want to eat honeybees by themselves or interfere their natural habitus, but we discovered the sustainable and nutrient value of honeybee’s drones! Why? Here you will get to know more about it….

I have been cooking with bee brood since 3 years and I want to share my my knowledge with everyone who is interested in this issue. A couple of weeks ago I won a grant of the Freie Universität Berlin to run a project together with Andrew Müller e Sophie Lokatis from the group Ymbe that focuses on honeybee’s brood as a new sustainable food source. From August until December 2019 we will organize workshops for students and beekeepers to grow consciousness and awareness about this nutrient resource. But more important is…

While bees are threatened by habitat destruction and pesticides, most honeybees are kept commercially by beekeepers. In Germany there are more than 120.000 professional beekeeper and around 80 % of those beekeeper routinely remove some combs of the hives that contain male drone larvae early in the season.

There are two reasons why beekeepers throw the male drones:

This ‘brood’ comb is rich in protein and other nutrients, and traditionally eaten in some African cultures. You needn’t worry about pollination rates or honeybee numbers if you’re eating drone larvae! Quite the contrary! Eating honeybee drone larvae might actually help stem their decline, because it supports the important work of beekeepers.

The first workshop I attended about edible insects was in Zurich, Switzerland, in Summer 2016. Daniel Ambühl from Sky Food gave me the basic knowledge to grow insects on my own. During the workshop we explored also the option of cooking and eating honeybee brood. The sweet honey taste of the drone’s brood is delicious! It’s nutritional value is enormous and it can be used as a protein alternative. Last year Daniel wrote a book called “Beezza” where he clearly explain this topic. I strongly recommend this book for those who wanna engross their mind. I got really inspired! In my opinion it is important to start using this precious resource that we already grow everywhere in Europe, instead or beside farming extra insects for human consumption or animal feed.

Last year I had the pleasure and luck to meet Erika Mayr from Stadtbienenhonig. She has been farming Honey Bees on Berlin roofs since 10 years and she is well known as city beekeeper. Together with Erika we started to collect combs and cook with the drone larvae to raise more awareness about this topic. We organized a beautiful event at STATE Studio Berlin where we had a public talk about the relationship between humans and animals and where we prepared a local dish all inspired by bees:

Brandenburg yogurt ice cream made with city honey, pollen, fresh flowers and the drone larvae. All regional products from Berlin.

Another exciting occasion to talk about the honeybee’s brood this year was the opening of the Clima Care Project at the Floating University in Berlin. We served different finger food snacks made with bee’s drones and some other edible insects. All the participants loved the idea, the dishes and got more and more curious about it.

Thanks to this network I had now the possibility to run our university founded project financed by the “Freie Universitat Berlin”. Do not hesitate to contact me if you want to learn more about our projects and possible cooperations! 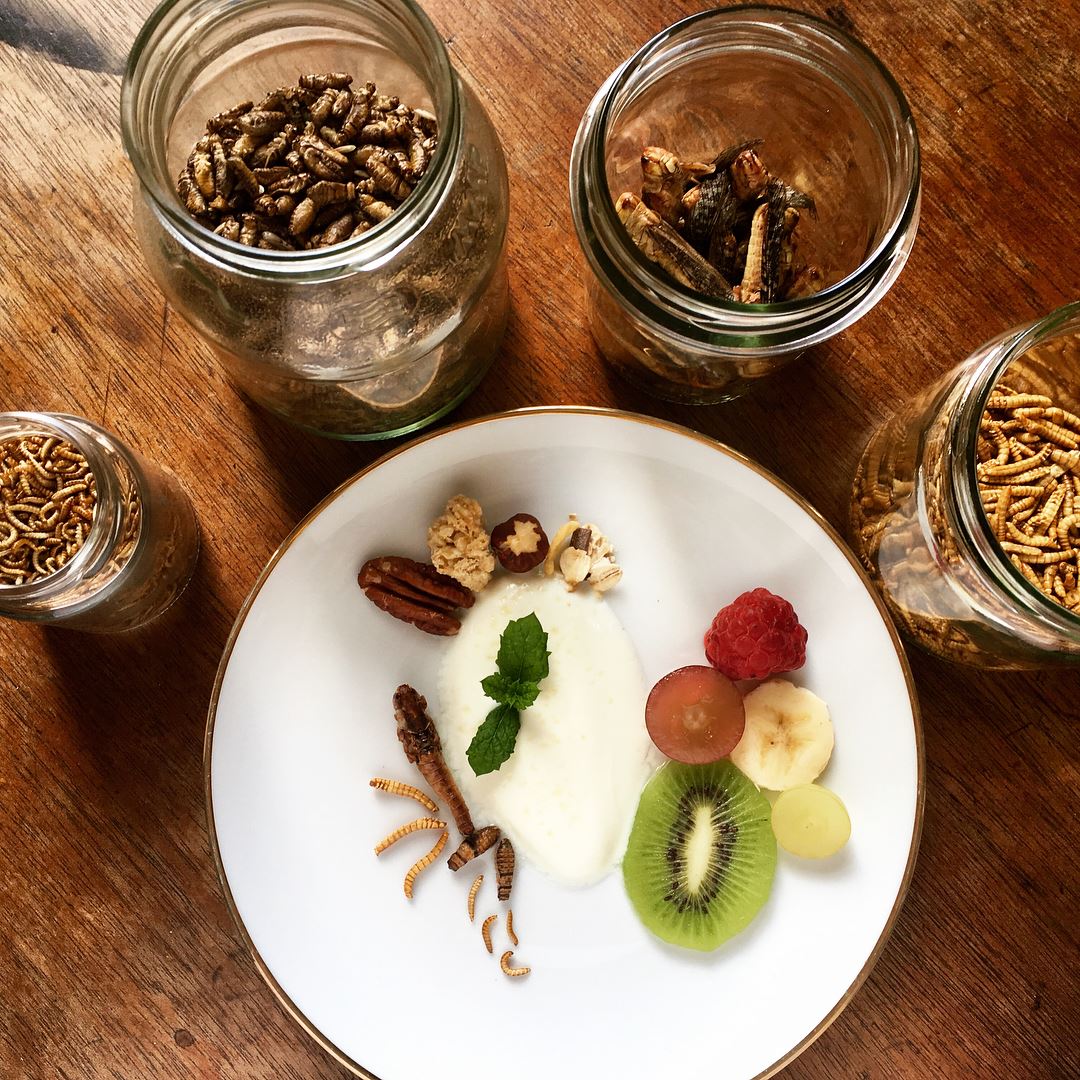